Review in The Weekend Australian 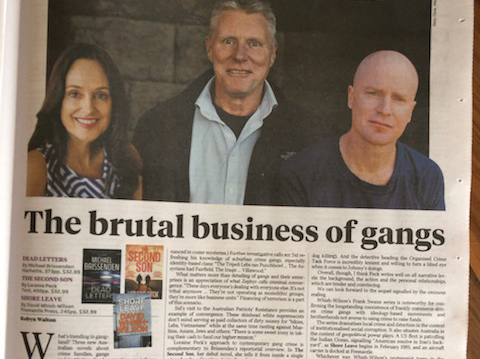 A big thank you to Robyn Walton and The Weekend Australian for the review over the weekend! The article has me in wonderful company with fellow crime writers David Whish-Wilson and Michael Brissenden.

What’s trending in gangland? Three new novels about crime families, gangs and institutionalised corruption are informative as well as entertaining.

Sadly, the unsolved murder of Perth madam Shirley Finn in 1975 is one true story that keeps on giving, and various high-powered identities have been named as suspects over the years. In 2010, David Whish-Wilson fictionalised this murder in the first book of his Frank Swann series, and now distinguished political journalist Michael Brissenden has invented a modern-day Sydney variant for the subplot of his second Aid Allen thriller.

Zephyr believes her mother knew too much about wrongdoing among police, politicians and the gangsters who did their bidding. Stonewalled in her mission to bring those responsible to account, Zephyr needs an ally. Will Sid risk his career by accessing verboten information for her?

Dead Letters is a hard-boiled thriller, its chief concerns the converging of diverse criminal gangs for gain and the persistence of organised corruption across politics, business and policing.

Australia’s military engagement in Afghanistan from 2001, and the corrupting effect participation had on some individuals and groups, supplies a significant backdrop.

Sid belongs to a Joint Counter Terrorism Team investigating a professional double hit, the victims a member of a Mexican drug cartel and a young conservative MP who was chair of federal parliament’s Joint Committee on Intelligence and and Security.

The MP’s widow reveals he had been receiving threats and the family dog had been killed. (That’s one crime that isn’t countenanced in cosier mysteries.) Further investigative calls see Sid refreshing his knowledge of suburban crime gangs, especially identity-based clans: “The Tripoli Lebs ran Punchbowl… The Assyrians had Fairfield. The Iraqis … Villawood.”

What matters more than the detailing of gangs and their enterprises is an appreciation of what Zephyr calls criminal convergence. “These days everyone’s dealing with everyone else. It’s not tribal anymore… They’re not operating as monolithic groups, they’re more like business units.” Financing terrorism is a part of this scenario.

Sid’s visit to the Australian Patriots’ Resistance provides an example of convergence. These skinhead white supremasists don’t mind serving as paid collectors of dirty money for “bikies, Lebs, Vietnamese” while at the same time ranting against Muslims, Asians, Jews and others: “There is some sweet irony in taking their cash to fund our higher mission.”

Loraine Peck’s approach to contemporary gang crime is complementary to Brissenden’s reportorial overview. In The Second Son, her debut novel, she tells if from inside a single crime family, a Croation-Australian clan in western Sydney.

Alternating the voices of two characters, Johnny Novak and his wife, Amy, Peck gives a sense of how pressured it is to live in this microcosm of gangland and how hard it is to leave other than in a coffin.

It’s not a glamorous life. Johnny’s self-reflections are harsh: “I’m not an outlaw living bravely on the edges of society … I used intimidation to bilk money out of hardworking men and women in my own community. My family sells drugs to dealers who sell to high school kids … “

Milan Novak, patriarch and crime family boss, has ordered Johnny, his second son, to kill a member of the rival Serbian-Australian crime family as revenge for the murder of his first son, Ivan.

Johnny is reluctant, believing this cycle of turf war killings will never end “because the losses in Eastern Europe were huge on both sides. The hatred still simmers”. Neither does he want to be killed: “I don’t want to die in a driveway in Bankstown. I f … king hate Bankstown. It’s full of Bulldogs supporters.”

Amy wants out for the sake of their young son. Johnny, while scheming to avoid murdering anyone, convinces himself he must lead one last heist before he escapes his clan’s hold on him. Proceedings are complicated by other crime groups, most notably a big crew of “meth-head bikies”, chasing gains.

Fans of crime family and mafia TV series and movies will recognise these and other plot components. The test of this novel, then, is not its degree of novelty but how capably Peck works with her material to give us an engaging read.

The novel is long: it drags in the middle when there are meetings, going and fringe, and tit-for-tat viciousness (yes, including a dog killing). And the detective heading the Organised Crime Task Force is incredibly lenient and willing to turn a blind eye when it comes to Johnny’s doings.

Overall, though, I think Peck writes well on all narrative levels: the background, the action and the personal relationships, which are tender and convincing,

We can look forward to the sequel signalled by the ominous ending.

Whish-Wilson’s Frank Swann series is noteworthy for confirming the longstanding coexistence of frankly commerce-driven crime gangs with ideology-based movements and brother books not averse to using crime to raise funds.

The series dramatises local crime and detection in the context of institutionalised social corruption. It also situates Australia in the context of geopolitical power plays. A US fleet is patrolling the Indian Ocean, signalling “American resolve in Iran’s backyard”, as Shore Leave begins in February 1989, and an aircraft carrier is docked at Fremantle.

Even feeling side can be blamed on gangs. Swann, a hardened PI and former detective in his 50s, is gut-wrenchingly unwell at the start of Shore Leave. His learns he has lead poisoning traceable to the pellets still in his body since he was shot five years earlier in a case involving the Junkyard Dogs, chief rivals of the Nongs biker gang.

Whish-Wilson writes succinctly, braiding storylines and keeping chapters brief. In one plot line, Devon Smith, son of a man who joined the Californian Aryan Brotherhood while in San Quentin, offers to supply the Nongs with M16 semi-automatics he will steal from his vessel’s armoury. Novice Devon learns that Australian fans are “all about the colour of the money”.

After the bodies of two murdered women are found, the push to locate an AWOL midshipman, African-American Charles Bernier, intensifies. This spells opportunity for far-right groups such as the Australian Patriotic Movement. Claiming solidarity with leftist anti-nuclear groups condemning the American presence, they rage about black sailors “raping our white women” and plan vigilante patrols.

While becoming involved with these cases, Swann is also in contact with a mine owner claiming police are complicit in thefts of his gold in transit. And he’s keeping a mentoring eye on young Lee Southern, whose Indigenous father once led a paramilitary survivalist group making it’s living from gun-running and marijuana plantations.